Passing of John A. Brenner

Passing of John A. Brenner 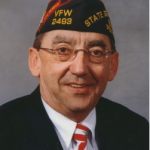 John became a volunteer firefighter with Eagle Fire Company No. 1, Mt. Wolf, at the age of 16. He was the elected secretary.

John served in the Army during the Vietnam War in 1966 and returned home to actively serve in the Veterans of Foreign Wars Post 2493, Mt. Wolf, for the rest of his life. During his service in country he was a U.S. Army radio teletype operator. He received the Vietnam Service Medal with 2 Bronze Service Stars, the Republic of Vietnam Campaign Medal and the National Defense Service Medal. He served as Post 2493 Commander, District 21 Commander and State VFW “All-American” Commander. His commitment to veterans included service as the President of the Pennsylvania Veterans War Council and Chairman of the State Veterans Commission. In 2000 he was honored as the York County Veteran Meritorious Service Award recipient.

He was elected to Mt. Wolf Borough Council for 10 years, 2 of which as Council President. He was the elected Judge of Elections in Mt. Wolf Borough for 22 years. President of St. John Lutheran Church Council and an active member of the senior choir for over 50 years. He was active in the Northeastern and Pennsylvania Jaycees; U.S. Jaycees Ambassador and JCI Senator. He received the Lester Wise Memorial Award for distinguished community service. He volunteered as a cubmaster, youth sports coach, and umpire for decades. John graduated in 1961 from Northeastern High School in Manchester.

John retired from Pennsylvania Power & Light Company after 32 years as an electrician. He was a member of the Zeredatha Lodge #451.

Viewings will be held from 2:00 to 4:00 PM, and 6:00 to 8:00 PM, Tuesday, July 30, 2019 at St. John Lutheran Church, 28 North Third Street, Mount Wolf, and Wednesday from 9:00 to 11:00 AM at the church. His service will begin at 11:00 AM Wednesday at the church. Officiating at the service will be his pastor The Reverend Jason Northridge. Burial will be in Manchester Union Cemetery. Arrangements have been entrusted to The Diehl Funeral Home & Cremation Center of Mount Wolf.

As a community servant, he asked that those willing could offer support to the St. John Lutheran Church Memorial Fund or the Manchester Union Cemetery Veterans Memorial Project at P.O. Box 718, Mount Wolf, PA 17347. Kindly designate to which Memorial fund you are making your donation.

About the Author: VFW District 21